Colorado officials are hoping the difference of one-hundredth of a mile will curb thefts of highway markers after the 420 mile marker sign along Interstate 70 was targeted multiple times.

Amy Ford of the Colorado Department of Transportation says the “MILE 420” sign near Stratton was stolen for the last time sometime in the last year, and officials replaced it with a sign that says “MILE 419.99.”

The number “420” has long been associated with marijuana, though its origins as shorthand for pot are murky. 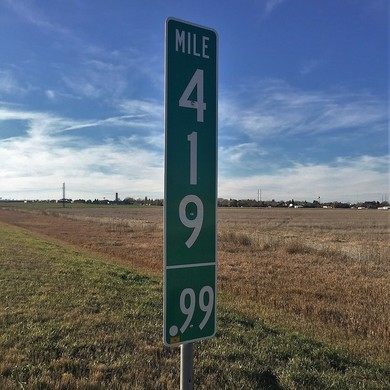 Ford says it’s the only “420” sign to be replaced in the state that recently legalized recreational marijuana. Most highways aren’t long enough to need one.

“Obviously people steal these signs,” Ford said, the Denver Post reported. “In the past, if a sign was stolen too much we wouldn’t replace it. This is sort of an innovative way for us to keep the sign there,” she said.

Mile 419.99, about 25 miles from the Kansas border, isn’t the only place in Colorado with a fractional mile marker. Cameron Pass in Larimer County has a “MILE 68.5” sign after frequent thefts of the “MILE 69” sign.