by I'm From Denver
in Colorado Spotlight, Weather
0 0
0

Tuesday will be the fifth and final day with very mild temperatures for Denver and the entire Front Range. A transition to a very different weather pattern starts Wednesday and heavy snow is expected to start Friday.

High temperatures in the metro area will reach at least the mid 60s on Tuesday which is more than 10 degrees above normal for the second week in March. Meanwhile, it feel almost like summer on the Eastern Plains with widespread 70s and some areas in southeast Colorado reaching close to 80 degrees around Lamar and Springfield. Most mountain towns like Breckenridge, Steamboat Springs, Aspen, and Telluride will climb into the 40s and 50s.

Worst case scenarios call for the metro area measuring the snow in feet. So for snow, the CBS4 Weather Team is advertising 10-20 inches of accumulation for the Denver, Boulder, and possibility Fort Collins areas. There is the potential for less, but there is also the possibility of significantly more. 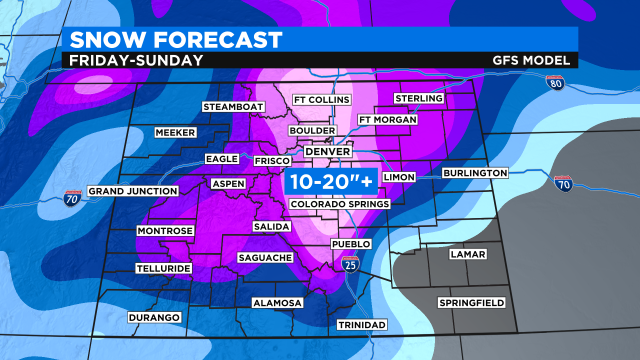 These Are The 10 Worst Places To Live In Colorado

There is a petition calling for RiNo District to revert back to its original name, ‘Five Points’

UPDATE: 88 Drive-In Theater Gets Go Ahead To Open After Confusion

Tarantulas out by the thousands in southeast Colorado for mating season

Black Hawk Casino’s Get Approved To Reopen On June 17th