How Many Of You Remember Blinky The Clown?

Blinky the Clown (June 30, 1921 – August 27, 2012), also known as Russell Scott, and simply Clown, was an American clown, television personality and presenter who starred in a Denver, Colorado television program called Blinky’s Fun Club. Having spent 41 years on television in character, Scott holds the record as longest-running television clown in history, as well as the longest running children’s television host in the United States. 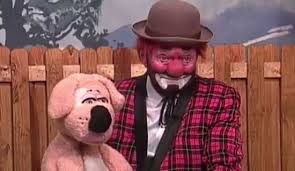 10 Things You Didn’t Know About Colorado